Blokes they were – nice blokes.
The nice bit was not what first met the eye though. I was struck by their curt movements. The firm build. Silent stare. Self control. Tight.

We had the shortest introduction round ever. Then, with a simple nod, they decided to go and shoot immediately. That’s what they came for, after all.

Maybe the archery would mellow down the ptsd that some of them had to deal with regularly.
It was an experiment for everyone. Myself included. But I had already seen some heartwarming effects when I had been shooting with refugees in the emergency shelter in Amsterdam.

The first session a lot happened. But, only if someone would come back could we have a conversation on the archery’s effectiveness.
Someone did come back. And this was our complete conversation when we met again: 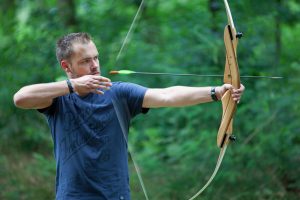 Since then I shoot once a month with whoever turns up. I got to know a couple of them as normal people. Very normal people who have done something very exceptional.
To protect others, they have risked their lives, lock, stock and barrel.
They’re now paying a high price for it. Every day. But not everyone understands.
So they have become very good at keeping up a tough appearance. Out of sheer self protection.

But sometimes, rarely, they let down their defenses.
Near the archery field a daft blackbird has decided to nestle on top of the wobbly blinds of the material shed.
That means for every archery session: take the nest down, take material out or in, put back the nest. Twice.

Fast, efficiently, quietly, as to disturb the birds as little as possible.
Three complete nests flew out this way.
That tells you something about the caretaking of these veterans.